It’s nine o’clock in the morning and, as usual, I am taking my morning stroll amongst the tomato plants. I sample a Sungold Cherry, which, of course, is divine. It earns a little moan of delight. I continue with my sampling - Chiquita, a delightful, red, oval shaped little tomato. It’s sweet at first and then a little hint of tingle appears.

Last spring I went to the local tomato seedling sale where I chatted with a friend, who has been working there for years. I always ask him to name some of his favorites. I know his response will begin with some thoughtful chin scratching and will grow into a 30 or 40 minute description of the latest heirloom varieties, usually those that do better in the heat rather than those more suited for the beach. When my friend asked me whether or not I grow “Neve’s Azorean Red” and I replied with “Do I grow what??” I knew there was going to be another very long conversation but that it would be about something really, really good. I left the seedling sale with not one, but three Neve’s Azorean Red seedlings and am so glad I did. This very large, deep red tomato is delicious and beautiful – a classic heirloom variety in appearance. The flavor is true tomato without being acidic. In July I harvested several one pound tomatoes from these plants and then it appeared they were finished. Being the eternal optimist I left them in the ground and sure enough, late in August they were alive with bright yellow flowers! Then the extreme heat came and I was so fearful that they wouldn’t be able to survive. Many flowers, in fact, did succumb to the prolonged triple digit temperatures. But several managed to remain strong and produced a second round of incredible (though smaller) tomatoes. This morning, as I inspected my plants, I felt lucky to discover two ripe Neve’s Azorean Reds in need of plucking!


It’s now 10 am, 75 degrees out and warming quickly. I think that instead of my bathrobe I really should be in a tank top and shorts to get a little of the sun kissed color that I so proudly wear. The rooster next door crows in his deepest and most robust voice and has been at it since long before the sun came up. A young rooster attempts to mimic his elder with his prepubescent squeaky cock-a-doodle-do. The geese stifle their honks. I am sure they are laughing at the pathetic little sound coming out of the baby rooster. The chickens’ coos connect into a kind of warbling hum telling the world that fresh eggs have been laid. I can hear children and families giggling and playing out in their yards. It seems like a perfect summer morning.

I cut two large bunches of Italian parsley for a recipe we’re making later in the day and then fill a bowl with a variety of cherry tomatoes to add color to this evening’s dinner table. I think about which bowl I’ll serve them in – maybe something hand painted that my son brought from Prague. The colors are bright and cheerful and would be perfect with red, yellow and bright orange cherry tomatoes. But today I decide on a wire basket that my friend, Wendy, brought back from her trip to Africa. The trip was not long after she received a kidney transplant – a true miracle in itself. Lately, she’s been hospitalized battling an infection and using the wire basket brings her a little closer.


This morning when I read the status updates on Facebook there was a definite theme throughout…I read every single message of gratitude…heartfelt gratitude for friends, for jobs, for health, for family. I myself wrote last night that I am so thankful to all of my Facebook friends for their encouragement, enlightenment and engaging conversation.

As much as it sounds like it, this is not just another summer morning. In fact, it’s not summer at all. Today is November 26, Thanksgiving. And while there is so much to be thankful for, at this moment I am most thankful for that small piece of heaven in my own back yard.
Posted by Laura, from the Garden at 4:26 PM No comments: 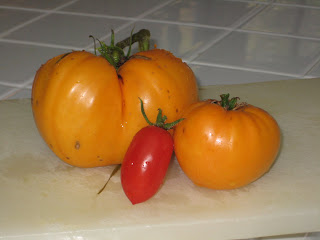 Wow! It's November 7 and it's still tomato season in my garden!
To be honest, I don't go out there every day like I do in the middle of summer. I know we're nearing the end of the season. With the sun lower in the sky and the hill behind us I find that one of my original, large beds doesn't begin to get sun until two in the afternoon. Whether I water the plants or the overnight moisture does the ground barely has a chance to dry out. I still have an abundance of flowers on the plants and some have quite a few green tomatoes. They're not ripening quickly, and in fact, some are rotting from the moisture rather than ripening. Then there are the squirrels - they're multiplying in number and have become incredibly blatant about helping themselves to my fruit.
I find it all to be more than a little depressing. When the sun goes away it seems to take some of my spirit with it. I try to plan for next season, making lists of the varieties I'll grow again and researching some I've never tried. I think about growing winter vegetables but they just don't have the same tug on my heartstrings that heirloom tomatoes do.
Today, the sun smiled down upon me and gave me one more reason to hold onto my happy tomato thoughts...I decided to walk out back before getting started with the day's activities. Visiting the tomatoes barefoot and in my pajamas has given way to a bathrobe and tennis shoes but it still warms my heart just the same.
I can always count on Sungold Cherry to give me sweet as candy treats. Jenny still provides smaller orange pearls of fruit. Neves Azorean Red doesn't seem to care that it's November and there are six very large tomatoes trying to ripen before the evening temperatures drop too low, or the squirrels make a meal out of them first. Jetsetter continues to produce beautiful red tomatoes that look more like apples than tomatoes. And just when I was heading back to the house I discovered a beautiful Kellogg's Breakfast tomato staring at me. Ignoring the fact that a squirrel enjoyed a bite before I could get to it I happily cut it off the plant and brought it inside!
It may have been seven o'clock in the morning but I just had to make this gorgeous surprise my breakfast. It did not disappoint! Even after removing the side that the squirrel ate I had a rather large tomato to enjoy. The outer edges were a bit crunchy, which I didn't really mind. It was somewhat crisp, like an apple, but I prefer crisp and firm to soft or mealy. The center of this tomato was meaty and just firm enough but not hard. It was juicy and flavorful and so incredibly delicious. It was a happy beginning to my day.
Several friends came by today and each had to come into the kitchen to taste a bite of my November surprise. Sitting here now, I see that there are still two bites left...I guess I know what I'll be having as a bedtime snack!
Posted by Laura, from the Garden at 8:12 PM No comments: