MYSTERY SOLVED!!
Last weekend I had the opportunity to spend a few hours sampling little bites of about 30 tomato varieties. This is something I do rather often here in my garden but it was special this day for two reasons. The tomato tasting was hosted by a man known as the tomato king. To me, he's Steve. Steve has been giving growing classes for as long as I have been growing and I've been fortunate to be the recipient of his knowledge and understanding of how tomatoes grow. Earlier this year, he and I discussed the pros and cons of hydroponic tomato growing. He had been asked to do some trials using a hydroponic set-up and asked for opinions, so I gave mine. To me, growing tomatoes is almost as much about the act of doing as it is about the fruits of my labor. I have spent years learning how to improve my soil so that it can feed and support my plants while I am feeding and supporting it. Using a hydroponic gizmo just seemed to defeat the whole purpose.

Steve decided to give the thing a try and he promised to keep me apprised of plant growth and production throughout the season. At the tomato tasting I was able to sample the fruit picked from the plant grown in water. When I arrived I was honored that Steve came to me and said "Come here, I need your expertise." Wow - that was a compliment I never expected to hear! He took me over to a pretty red tomato, all cut up and ready for sampling and told me to take a bite.

I was taught to be polite so when I took a bite and said "that's awful" it was quite a surprise. But it was. Then he gave me a bite of another red tomato. He told me both tomatoes were Early Girl. The second bite was full of earthy flavor and tasted like a tomato should! One was grown in the ground in Steve's backyard and the other was the hydroponic experiment. You know, of course, which was which. The moral of the story?? Tasty tomatoes are grown in healthy soil and not in water - remember, I always tell you not to overwater! This is proof!

Before I left I approached Steve and said, "Now I need some of your expertise." I pulled the mystery tomato out of my bag and held it up for him to see. Within a nano second he simply said "Green Pineapple". That's why he's the Tomato King. Thanks, Steve.
Posted by Laura, from the Garden at 5:41 PM No comments: 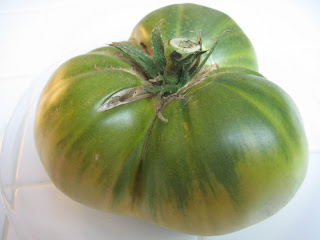 Every year I end up with a mystery tomato in my garden. I'm not referring to the volunteers that pop up here and there thanks to squirrels depositing seeds wherever they fancy. I'm talking about one of the very carefully selected varieties of heirloom tomatoes that I absolutely must have in my garden that season. When I buy seedlings it is with purpose and intent. I take along a list of what I know I want to grow. I read the labels and descriptions of every variety before making selections. I create a chart so I can keep track of how many of each size or color I am putting in. So, how do I always end up arriving back at home with one plant that I cannot identify? It's like losing a sock somewhere between the washer and the dryer - it's just something that happens without explanation!

This year's mystery plant was stuck in a small space in between the artichokes. I wasn't sure it would get enough sun but thought to myself "I don't even know what it is, so a sub-prime location in the garden will be just fine". This plant got off to a slow start. I labelled it "Persimmon ???" because I seemed to recall buying an extra Persimmon after they were such a huge hit last year. When the sun finally appeared the mystery plant became very happy and it now stands 8 feet tall! It is lush and green in spite of the triple degree temperatures we're having - quite different, by the way, from the other persimmons growing in the yard. It produced several fairly large roundish fruit at the bottom. They cracked and rotted before becoming ripe. Toward the top of the plant there are many more large, green fruit waiting to mature in color. Just about at eye level there was one huge triple lobed tomato just waiting to ripen. It's shape was quite different from the others but the color was just the same...medium, soft green with subtle striping from the shoulders in darker green. If I looked very closely I could see just a hint of blush trying to come through. If tomatoes had a "finish" I would have called this matte as opposed to Green Zebra which is more of a semi-gloss. So, I waited and waited for the color to change, thinking it would soon become one of my bi-colored favorites. But as the August temperatures rose I was afraid to leave it on the plant to ripen. In 105 degrees it could have cooked out there. I thought I would bring it inside to ripen on the counter top but when I took it in my hand I realized it felt perfectly ripe. I was shocked as it was still green.

There, on my kitchen counter sat a 1 1/2 pound green tomato that begged to be eaten except for the fact that I wasn't sure if it really was ripe. I waited a day and nothing changed. In my house we make an event out of sampling new varieties and comparing them for flavor and texture. Tomato taste tests have become a tradition. So, we cut in. It was slick and juicy on the inside. Sure enough, the meat inside showed those same hints of blush coloring. Not knowing what to expect I took the first taste, making sure it was safe for the others to eat. All they had to do was to look at my face...It was incredible with a true tomato taste, just slightly sweet to cut the acid and a tiny tingle on the tongue just to remind you that you're eating a tomato.

I don't know what that variety was called and I was so excited that I made sure we ate every last bite of my delicious mystery, completely forgetting to save some seeds. Maybe someone will be able to identify it or maybe it will just have to be known as 'One Hit Wonder".
Posted by Laura, from the Garden at 8:27 AM 2 comments: