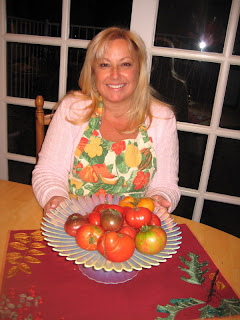 After a long afternoon out in the garden I decided to stay in this evening. The original plan was to go out to a movie but getting cleaned up to go out in public would require more energy than I had in reserve. The decision was made to stay in, put together a salad and throw something on the grill for dinner.

With potatoes scrubbed and baking in the oven, steaks marinating and ready for the grill I began to assemble the salad. I tore the lettuce just brought in from the garden, sliced fresh mushrooms and cucumbers and quartered two bright orange tomatoes bought earlier in the day at the local grocery store.

I have a rule about produce…either I grow it in my backyard or I buy it from the one local grocer whose produce is significantly better than any other market in the area. It’s just April so I don’t really expect the tomatoes to be great. I avoided buying them all winter but today the sight of those bright orange orbs was more than I could resist! The sun was shining, the temperature warm and my imagination ran wild and I was convinced that I was going to enjoy a perfectly delicious tomato…WRONG!! The tomato was soft and mushy inside, the seeds slipped out in their gel and my taste buds wondered why I even bothered eating this at all.

For the better part of this afternoon I worked in the garden. Today was the day I planned to plant the tomato seedlings that I had purchased a week or two ago. I selected 60 new varieties to grow this year along with 10 or 20 of my favorites – Pineapple, Neve’s Azorean Red, Sungold Cherry. It took much longer than anticipated to decide where each seedling should go. Some would be planted in the ground, some in raised beds and others in containers. By the time I decided on the layout and began digging the deep holes for each tomato start the sun was lowering behind the hill and the air was getting chilly. As much as I wanted to get them into the ground today I knew that watering late in the afternoon would result in really cold water shocking the delicate roots of the plants later this evening so I chose to dig the holes but to delay planting until tomorrow.

Planting tomatoes each year renews my faith in the wonder and possibilities ahead. It raises my spirits. Spring reminds me that we have this great opportunity to begin again. I marvel that with a little care these small seedlings will become large plants that will provide food for my loved ones. The tomatoes are the reward for the hard work. It’s the hard work that feeds my soul.
Posted by Laura, from the Garden at 10:30 PM No comments: